Anyone visiting this site for information on Harold Sumption, I would be very interested to hear from you, and either help you to learn more or perhaps discover from you a little more about my grandfather who said so little about his working life while he was alive. I'd be very grateful if you could email me and let me know the nature of your interest. 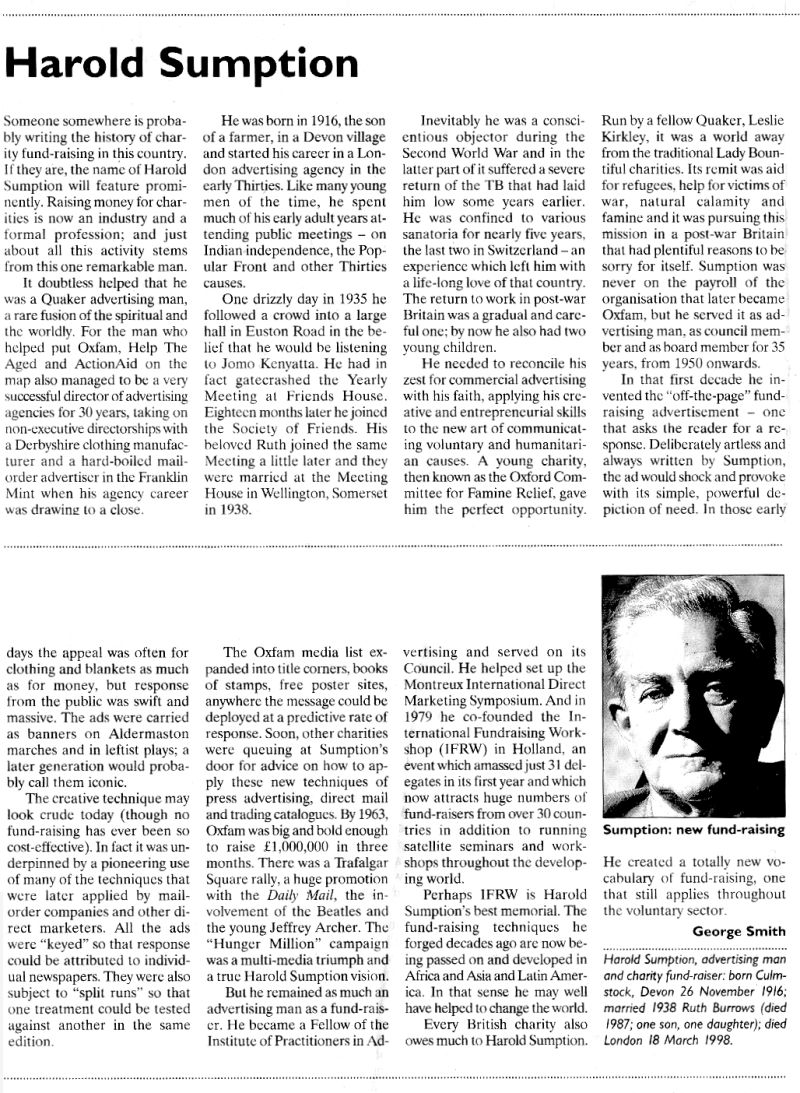 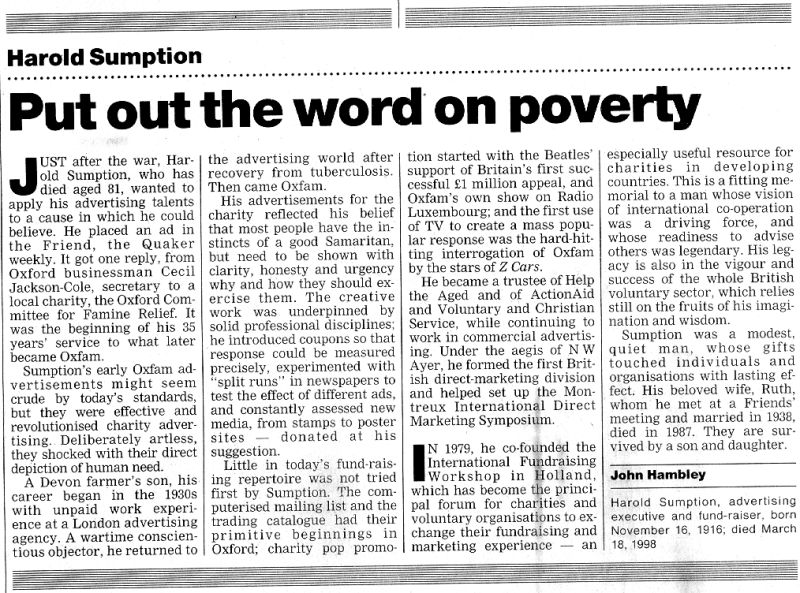 The name Harold Sumption will mean little or nothing to you. Yet with his recent death, the voluntary sector lost the father of modern-day fundraising practice.

He was a Quaker, deeply committed to the causes for which he raised funds. As an advertising man, he saw all too clearly how commercial advertising and marketing techniques could help fundraisers communicate their appeals to a wider audience in a more understandable fashion. He also saw the risks. Sumption recognised that fundraising is not simply another commercial activity, but that techniques and methods borrowed from commerce must be amended, and sometimes even discarded, to protect the primary rights of donors and beneficiaries.

Many people, understandably, have conflicting views about the nature of modern-day fundraising. On the one hand, people remain extremely committed both to the charities they support and to the causes those charities serve. On the other hand, there is uneasiness about the growing number of appeals and the increasing use of 'commercial' methods.

There is a quandary here for donors, the general public, charities and fundraisers alike. A balance needs to be struck between the proper desire to maximise the resources directly available to a charity's beneficiaries and the associated costs charities incur in identifying new supporters and in encouraging existing supporters to give more. For many, it is almost anathema that fundraisers should be paid at all, yet it is equally unacceptable to have inexperienced, untrained fundraisers wasting resources on inappropriate fundraising activities.

At its heart, fundraising depends upon trust. Potential donors need to believe that the appeals placed before them are honest, accurate and capable of partial or complete resolution as a result of their support. In giving that support, donors have an absolute right to expect that the maximum amount from their gift will go directly to support the needs identified by the fundraisers, and that this will be achieved in the most efficient, effective and appropriate manner possible.

Identifying and promoting accepted standards of fundraising practice are central to preserving and developing this trust. In an increasingly complex environment where the demands and pressures placed upon fundraisers have grown enormously, they need to be clearer than ever as to what constitutes acceptable and unacceptable practice.

Faced with important and urgent needs, it is morally unacceptable for charities and their fundraisers not to seek voluntary support to address that need in an effective manner. But this is not enough. Fundraisers have to be certain not only that the needs they portray are real, but also that the methods used to communicate them are efficient and effective if charity resources are not to be wasted. They also need to be appropriate in their style and content, both to the beneficiaries and to existing and potential donors.

This is not just a moral prerogative. Donors will lose trust and confidence in a charity - and will stop giving - if they feel that the appeals and the methods used to communicate them are innappropriate.

This is why 21 senior fundraisers joined together some 15 years ago to establish the ICFM. The institute is concerned with identifying accepted standards of professional fundraising practice and clarifying what constitutes efficient, effective and appropriate behaviour in a wide range of different circumstances. The ICFM also seeks to support fundraisers in their work and ensure that the rights of donors and beneficiaries are properly respected. It does this through its code of conduct, more than 20 specific codes of practice and guidance notes, training courses and the establishment of a recognised qualification for fundraisers.

Fundraising has never been more important to charities than it is today. Therefore fundraisers must work to the highest standards of professional practice to maintain and enhance the trust that the public place in us.

Harold Sumption set fundraisers everywhere a fantastic vision of the very real practical good that can be achieved when they work to the highest standards of professional conduct. As he put it: 'Fundraising is not about money, it's about work that needs doing. If you start by asking for money, you won't get it and you won't deserve it.'

Stephen Lee is director of the ICFM. In September, he becomes chief executive of the new fundraising support unit at Kingston Smith chartered accountants. 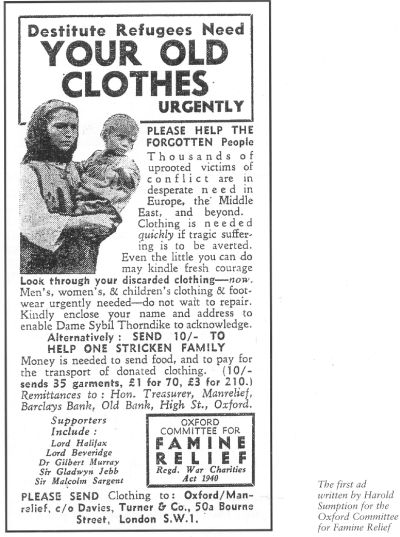 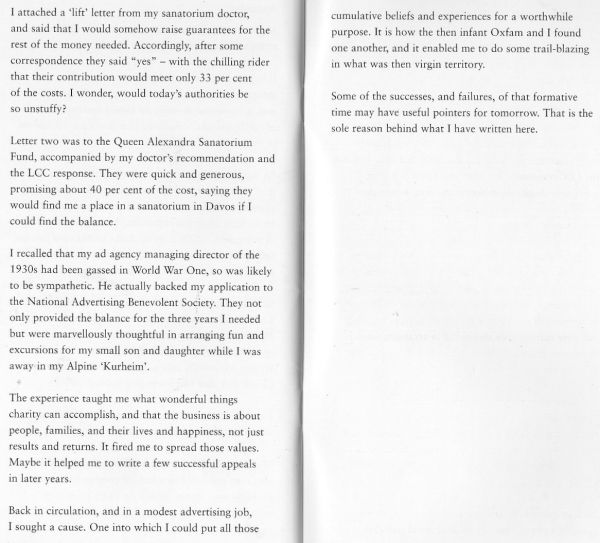